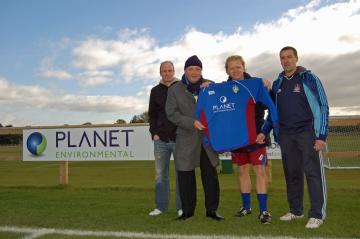 Planet Environmental are the new shirt sponsors for Sandbach United F. C. after signing a 3 year deal to sponsor open age football at the Hind Heath Road Club for the next 3 years.

Planet’s head of sales Wayne Burton said “We’re delighted to sponsor the Open Age Section of Sandbach United F. C. and back the sporting talent in the area.”

United’s Business Manager Gary Walker added “We’d like to thank Planet Environmental for their support. As a local club with over 600 members the backing of companies like Planet is crucial in order to continue with the development of football in Sandbach.”